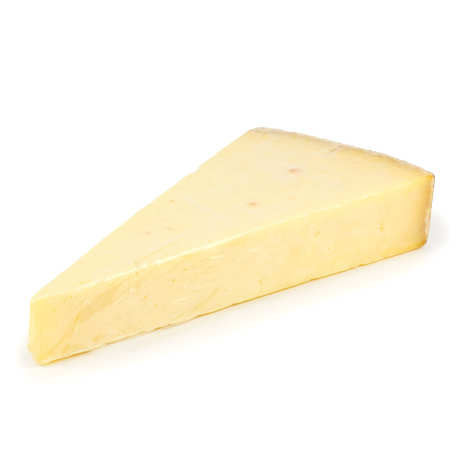 With a maturation period ranging from 3 and 6 months, Cantal entre-deux has a more marked taste and a browner crust than the mild Cantal.

Produced by the Neuvéglise dairy cooperative in the Cantal, this cheese has been selected and matured by Marcel Charrade, a maturer specialising in cheeses from the Massif Central.

Matured for 3 to 7 months, the Cantal entre-deux delivers a fruity taste in the mouth, with hints of hazelnut and fermented rème. Its rind has become buttoned with a golden colour, while its paste has become more melting and begins to mesh.

It will go well with a fruity red wine, such as a Gaillac or a Marcillac.

Cantal, an AOP cheese from the Massif Central

Cantal is an uncooked pressed paste made from cow's milk in the form of an oven. For each ovenme of about 40 kilos, 400 litres of milk are needed. Since 1956 it has had an Appellation d'Origine Protégée (AOP) which guarantees its traditional method of production and its constant quality.

Its production area (7200 km²) is centred on the Cantal, the department from which it takes its name, but also extends to a few neighbouring communes in the Puy-de-Dôme, Aveyron, Corrèze and Haute-Loire. This extensive breeding ground offers its rich pasture resources and allows the cheese to be made with milk anchored in its terroir.

The fourme de Cantal has the cylindrical shape typical of Auvergne cheeses. Its paste, firm and uncooked, is pressed twice, with crushing of the curd between the two presses and salting in the mass.

The paste has an ivory colour when removed from the mould (young maturing), to gradually become dark yellow. Initially supple, it can be slightly crumbly for the most mature. The rind gradually thickens, going from a grey-white to golden, then brown. It can be strewn with ochre to brown buds.

Sometimes tart at the beginning of the maturing process, its taste intensifies until it becomes fruity and persistent.

Ferme de Bassignac
Farmer's yoghurts made with cow's milk and vanilla
4 yogurts of 125g each
3.15 €