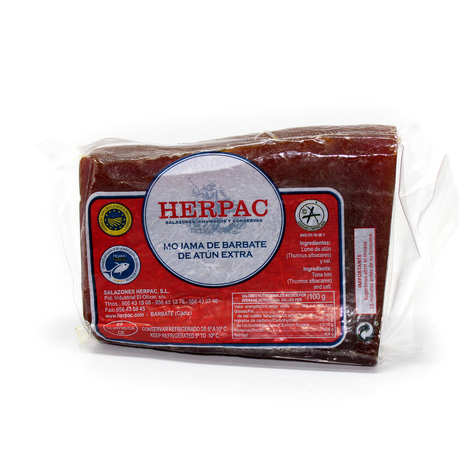 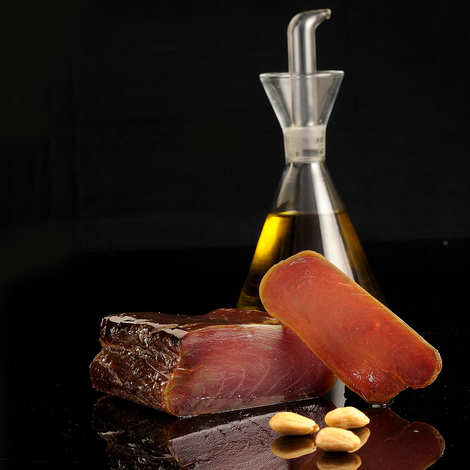 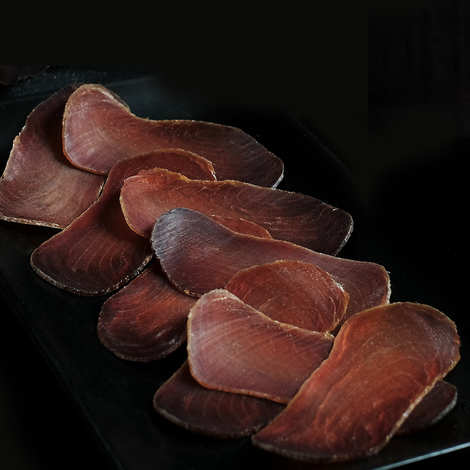 If you like bottarga, you'll love the tuna mojama! A speciality of the Spanish region of Murcia, these salted tuna fillets will surprise you with the richness of their flavours.

Have you ever heard of the Mojama? This preparation, which is not lacking in originality, is the maritime counterpart of Bündnerfleisch! It is a salted tuna fillet, a Spanish speciality from the Murcia region.

Tuna Mojama is prepared by pressing the tuna fillets for one or two days with coarse salt. The fillets are then removed from the salt and left to rest for two days, wrapped in damp bags. Finally, they are washed before being left to dry for 15 or 20 days. They come out with a beautiful waxy appearance, hence the name, taken from the classic Arabic mušamma', "made of wax".

Herpac offers you this pretty slice, vacuum packed and easy to store.

All you have to do is cut it into thin slices, and cover them with a drizzle of olive oil on top.

Herpac is a leading family business in the canning, curing and smoking sector.

Herpac was founded in 1986 by the Pacheco brothers. After many years of working in their small fish shop in Barbate, and thanks to the good reputation they had achieved, Francisco and Diego decided to start selling mojama, drying it by hand with nothing but sun and wind, in their establishment in Calle Hermanos Romero Abreu. Today they have a central facility of 8,500 square metres, three of their own shops and fifty employees, and are present in ten countries.

It has never ceased to be a family business, and now the third generation is beginning to run it. Herpac is a leader in the canning industry, and its tuna mojama is one of the most recognised in the world, being one of the few to have been chosen to bear the distinctive seal of the Protected Geographical Indication "Mojama de Barbate".

Its almost one hundred references, which also include canned bluefin tuna and smoked artisanal products, have received countless national and international awards and can be found in the most important shops and gastronomic areas in the country. In addition, its factory receives thousands of visitors of different nationalities every year, where the age-old art of tuna cutting is shown live.