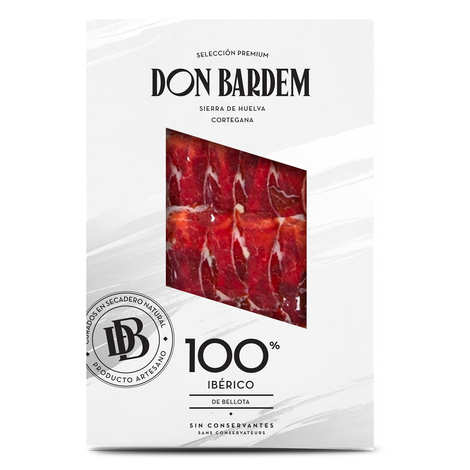 The best of Iberian cold meats, for a taste trip to Spain for tapas with friends or as an accompaniment to a nice salad with garnish

This 100% Iberian Bellota ham is cut into large slices ready to be eaten, and will delight your taste buds. Because it is made with purebred Iberian pig meat, you will be able to entouthiasmer yourself with these unmistakable flavours of Spanish gastronomy!

Each piece will offer a different palette of flavours, depending on the part of the ham in which it is cut.

A superior category of Iberian ham, this ham is cured from the hind legs of Iberian pigs (purebred mother, Iberian + Duroc father), fed solely on the natural diet of the dehesas, the pastures in which they graze freely. This diet is mainly made up of oak acorns, which they love, but also a wide variety of roots and grasses.

A maturing period of 3 years allows the flavour and juiciness of the meat to express itself at its best potential.

The melted shades of red, pink and ochre of these beautiful slices call for greediness. Compared to other types of ham, bellota hams offer a more beautiful infiltration of fat into the muscle, in the form of beautiful pink and shiny white streaks, thus a melting and juicy texture.

Its exquisite and unique aromas will express themselves with softness and delicacy.

The fat of the ham after slow curing in the Dryers and Bodegas is a treat not only for the palate but also for the health, thanks to its high content of oleic acid, like olive oil. Iberian ham is rich in marvellous vitamin J (Ham), with delicate flavours recommended for health.

The aroma of an Iberian bellota ham is heady, penetrating and persistent due to the quantity of odorous volatile substances it contains. It gains both power and finesse when fully matured.

In addition to the sense of smell, ham also appeals to other senses. The visual through its colour, its shine, the marbling of its flesh, its texture and the fluidity of the fat. Finally, the taste allows us to appreciate its subtle salty-sweet nuances.

Based in Extremadura, the cradle of the Iberian pig, Don Bardem cured meats are made from Iberian breed pigs, reared in the open air by the best breeders in Spain, and highly appreciated by connoisseurs. From breeding to curing, Don Bardem is committed to strict quality control and guaranteed traceability of each of their products.

It is more particularly in Montánchez, a village at 990m above sea level in the Sierra, that Don Bardem hams and other Iberian cured meats are matured. The cold and dry climate in winter (a succession of low temperatures and falling humidity) and then harsh in summer (hot and airy) is the key to this village's reputation for curing hams and other Iberian meats for five centuries. The cold allows, with a soft salting, a perfect stabilization of the hams. The summer heat then causes the hams to sweat, which leads to an impregnation of fat in the muscle fibres. All this is done under the watchful eye of the cellar masters, who check each piece daily by eye, smell and touch.