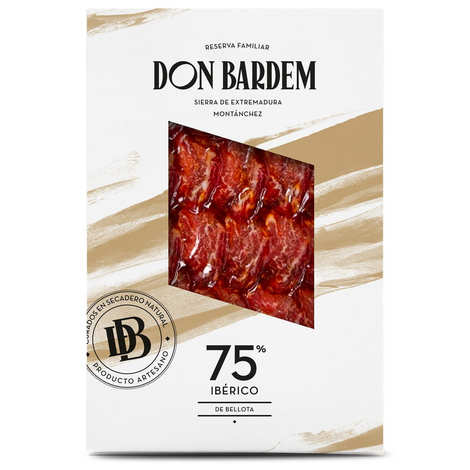 One of the masterpieces of Iberian cured meats, as appreciated as ham, delicately seasoned and already sliced, ready to be enjoyed!

Matured for 5 months under the watchful eye of Don Bardem's "maestro bodeguero", these beautiful slices of lomo await only one thing: to delight your gourmet taste buds! No need to slice it, it's already done!

Prepared from Iberian breed pigs, fed only on oak acorns and other natural resources from the dehesas of the Spanish sierra, this lomo delivers all the authenticity of the flavours of Iberian cold meats, with their melt-in-the-mouth texture!

As prized as Iberian hams by Spanish gourmets, lomo is a sausage made from pork tenderloin (muscle along the spine). At Don Bardem, the marinade is light, based on olive oil and Pimentón de la Vera (paprika), to let you enjoy its true aromas!

It is prepared with the same steps and the same care as Iberian hams: after cutting, it is cured and marinated, before being stuffed into a natural gut and then cured for 5 months under the watchful eye of the "maestro bodeguero" of Don Bardem, in Extremadura.

This muscle gives a very supple and soft sausage in the mouth. To be enjoyed as a tapas or as an accompaniment to a Catalan gazpacho. Well cured, it will charm you with its exceptional taste, soft and persistent at the same time.

Its supple texture is due to the fact that the pork loin used to prepare it is a muscle that the animal does not use very much, which prevents it from hardening and facilitates the infiltration of fat.
Tasting advice

Don Bardem advises to open the vacuum pouch and to leave the lomo at room temperature at least 20 minutes before tasting. If you can't wait, pass the pouch (without opening it) under warm water for one minute to temper the product and enjoy all its aromas.

Lomo is the only Spanish cold meat, apart from shoulder and ham, to be recognised as an Iberian product.

Iberian cured meats are renowned for their superior quality, made possible by the breed of Iberian pig and its well-developed intramuscular fat, which gives it its juicy side, as well as the natural diet of the pastures of the Spanish Dehesas, large expanses where the pigs frolic and feast on the abundance of oak acorns.