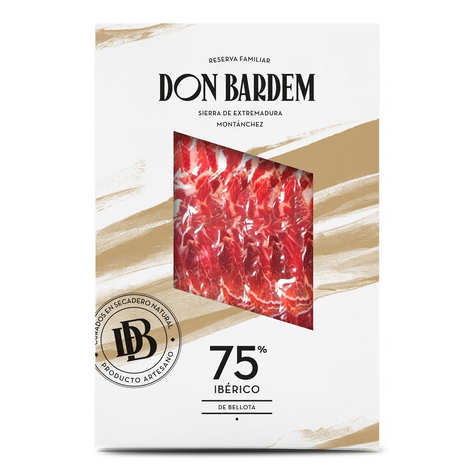 The best of Iberian cold meats, ready to be tasted to reveal its aromas in every bite. Enjoy it in tapas, on toast or in a salad.

With its balanced notes and long finish, this Iberian shoulder of pork will delight your taste buds. Sold sliced and vacuum-packed, it is perfect for tapas, toasts or salads!

Prepared from the shoulder of pigs of Iberian breeds raised in the open air and fed on oak acorns in the sierra, it will bring you all the fame of Spanish cold meats.

Shoulder, the little sister of ham

Made with the front leg of the pig, against the back for the ham, the shoulder is not to be outdone regarding its flavours! With its enveloping aroma and reddish colour, it offers a higher proportion of fat in small natural infiltrations, which gives it a very juicy texture. This intramuscular fat is homogenous and creamy and melts pleasantly on the tongue.

After 24 months of curing, which reveals all its flavour and juiciness, the shoulder is detailed in thinner slices than the ham, due to the anatomy of this piece.

Like ham, this Iberian sausage is rich in proteins, B vitamins and fatty oleic acids. It is also quite low in calories, making it a full-fledged member of the 100% healthy Mediterranean cured meats.