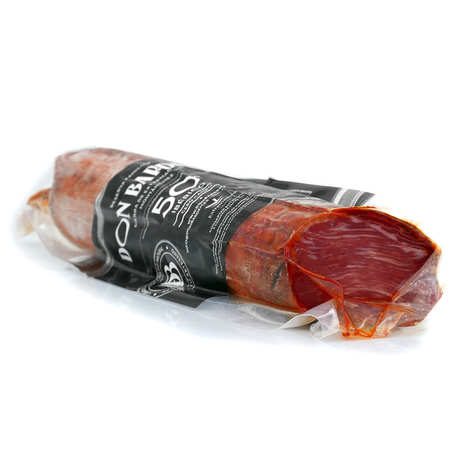 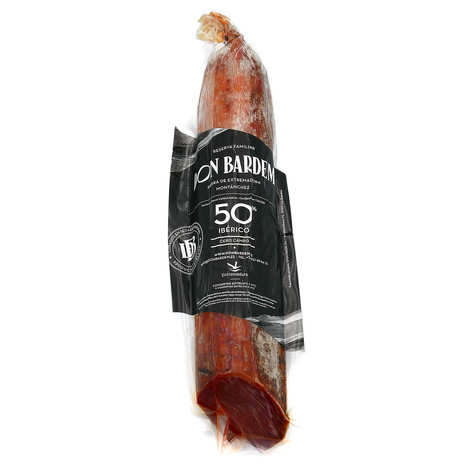 The tastiest and most appreciated part of the Iberian pig, with a sweet, slightly salty flavour and a characteristic smoked meat taste. All you have to do is present it to your guests and slice it to enjoy it!

Matured for over 80 days under the watchful eye of Don Bardem's "maestro bodeguero", these beautiful slices of lomo are waiting for one thing: to delight your gourmet taste buds!

This lomo de Campo is prepared from Iberian breed pigs, fed mainly on oak acorns and other natural resources from the dehesas of the Spanish sierra (with a supplement of cereals and legumes produced on the farm). It will deliver all the authenticity of the flavours of Iberian cold meats, with their melting texture!

As prized as Iberian hams by Spanish gourmets, lomo is a sausage made from pork tenderloin (muscle along the spine). At Don Bardem, the marinade is light, based on olive oil and Pimentón de la Vera (paprika), to let you enjoy its true aromas!

It is prepared with the same steps and the same care as Iberian hams: after cutting, it is cured and marinated, before being stuffed into a natural gut and then cured for 5 months under the watchful eye of the "maestro bodeguero" of Don Bardem, in Extremadura.

This muscle gives a very supple and soft sausage in the mouth. To be enjoyed as a tapas or as an accompaniment to a Catalan gazpacho. Well cured, it will charm you with its exceptional taste, soft and persistent at the same time.

Its supple texture is due to the fact that the pork loin used to prepare it is a muscle that the animal does not use very much, which prevents it from hardening and facilitates the infiltration of fat.

The name cular indicates that the ingredients are exclusively Iberian pork and natural gut (cular in Spanish), which gives it its irregular shape.

How to slice the lomo?

For a classic cut, make slices a few millimetres thick (2 to 3mm), in the width of the muscle like a sausage. You can also cut it horizontally, to obtain larger slices and surprise your guests!

The lomo releases all its aromas at a temperature of around 24°C, like ham and other Iberian sausages.

Bernard Marot
Fish Soup from Croisic and Turballe Ports
From
4.00 €