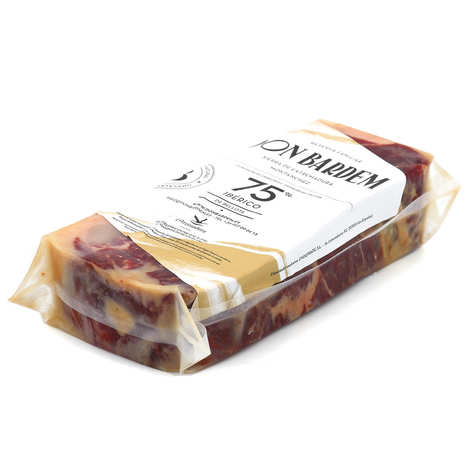 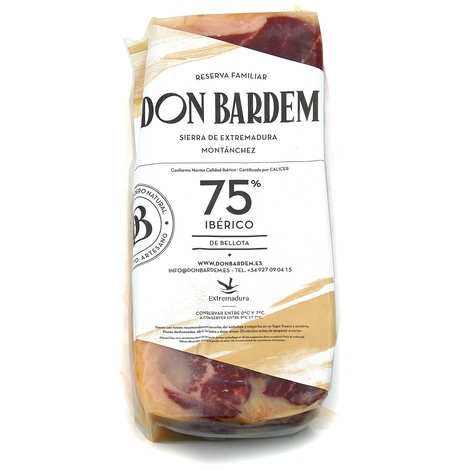 A top-quality Iberian ham, prepared from free-range pigs, ready to slice and enjoy!

Available here in generous vacuum-packed pieces, already boned, derinded and defatted, all you have to do is let your knife run through the tenderness of this ham to make beautiful slices to enjoy. Tapas, sandwiches and other delicacies await you!
Belotta Ham

A superior category of Iberian ham, this ham is cured from the hind legs of Iberian pigs (purebred mother, Iberian + Duroc father), fed solely from the feed of the dehesas, the pastures in which they roam freely. This diet is mainly made up of oak acorns, which they love, but also a wide variety of roots and grasses.

It is more particularly in Montánchez, a village at 990m above sea level in the Sierra, that Don Bardem hams and other Iberian cured meats are matured. The cold and dry climate in winter (a succession of low temperatures and falling humidity) and then harsh in summer (hot and airy) is the key to this village's reputation for curing hams and other Iberian meats for five centuries. The cold allows, with a soft salting, a perfect stabilization of the hams. The summer heat then causes the hams to sweat, which leads to an impregnation of fat in the muscle fibres. All this is done under the watchful eye of the cellar masters, who check each piece daily by eye, smell and touch.