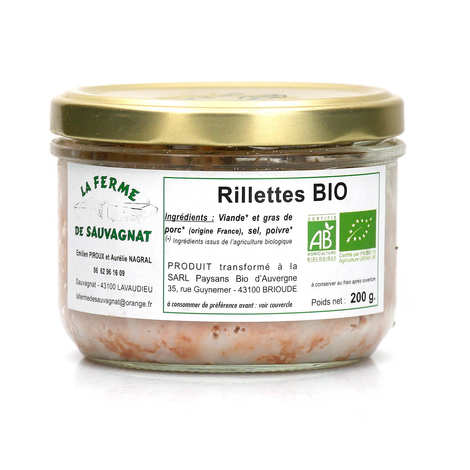 Who doesn't like pork rillettes? But when they are made by the farmers themselves, with pigs reared in the open air, with the good altitude air of the Massif Central, and fed with the farm's own grain, they become even more delicious!

You might like to spread them on a nice slice of farmhouse bread, with a few pickles or a chutney.

But try them also as quiche, as sarthe oysters, as shepherd's pie, to stuff mushrooms, cherry tomatoes and other small vegetables (turnips, pastry, ...) or to accompany farfalle. Guaranteed delight!

Aurélie Nagral and Emilien Piroux have been raising suckler cows and outdoor pigs organically since 2008 in the commune of Lavaudieu, near Brioude in the Auvergne, at an altitude of 600 metres. The animals are fed exclusively with grass or cereals produced on the farm.

The products are made and prepared on the spot by the farmers, in the laboratory of the SARL Paysans Bio d'Auvergne created by Emilien and four other producers. They contain no additives or preservatives.