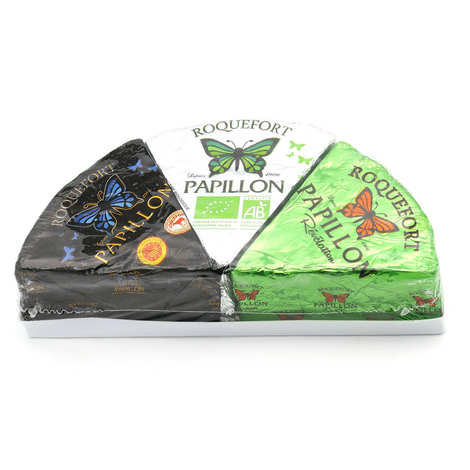 Roquefort, a mythical cheese: it is a cheese that is no longer presented.  And yet, few people know that the first mentions of Roquefort can be found in Carolingian texts as early as 1070. Almost 900 years later, in 1925, Roquefort was the first cheese to receive an Appellation d'Origine.

Made in Aveyron: Roquefort has always been made in Aveyron, around Roquefort-sur-Soulzon, which gives it its name. It is a raw milk cheese made from Lacaune sheep's milk and matured in natural caves where the action of penicillium roqueforti gives the cheese the famous blue-veined paste and taste that made its fame.

About Papillon and this box: Papillon is one of the historic producers of Roquefort with more than 100 years of history (creation of the brand in 1906). This box will allow you to taste and compare three Roquefort from Papillon:

- 1 portion of Roquefort Révélation, an elegant and complex Roquefort, with a melting texture, very fine and smooth and a small buttered taste.

- 1 portion of Roquefort Taste Papillon Noir, an exceptional Roquefort with an elegant white paste with intense blue veins, a smooth and supple texture and a typical and long taste in the mouth.

Marcel Charrade
Petit Livarot - cheese made from cow's milk
From
4.95 €