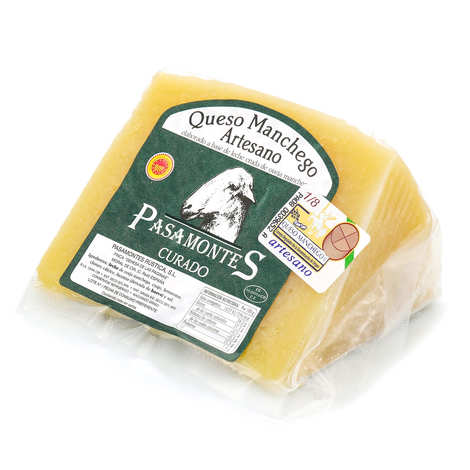 This Manchego Pasamontes is handcrafted from the raw milk of Manchega sheep, reared on the Dehesa de Los Llanos estate.

Manchego cheese has a DOP (Protected Designation of Origin). The PDO area is located in the La Mancha region and covers a large part of the provinces of Albacete, Ciudad Real, Cuenca and Toledo.

The manchego we offer you is made in the province of Albacete and is matured for 6 to 7 months.

It has a relatively uniform straw colour and is characterised by its mild taste and aroma. Its creamy and crumbly texture allows it to break down in the mouth, releasing all its flavour, a real invitation to try some more!
Slightly spicy due to the maturing process, this manchego has a nice taste balance, without being too salty.

The manchego is a must-have in Spain, it is eaten daily and in different forms. The most common accord? With quince paste!

Luigi Guffanti
Pecorino with saffron and black pepper
From
9.30 €