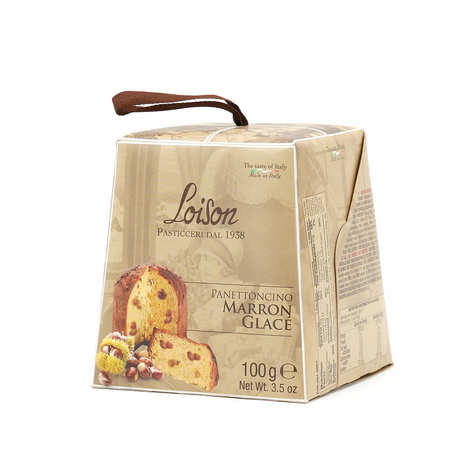 A candied chestnut panettone to fill our stomach with joy

According to tradition, Panettone was invented in Milan during the reign of Ludovico di Moro. In preparation for a banquet, his pastry chef made a confection, which, in accordance with custom, was to be a real treat, involving marzipan, dried fruits, spices and honey. Unfortunately, the cake was burnt, leaving the poor pastry chef with very little time to find a solution. He called over his apprentice, Toni, who was responsible for making the sweet breads for the cooks' table. Made by hand from a mixture of flour, egg, butter, sugar and yeast, these breads also contained a handful or two of dried fruit and candied fruit. The guests were extremely surprised when presented with this bread, but once they tasted it, they exclaimed how delicious it was and asked who was responsible for making it. When they were told that it was the bread made by Toni, they decided to call it just that: the Panettone! Thus was invented this famous sweet bread, which is today an essential part of Christmas celebrations. Available in a multitude of varieties, Panettone is popular the world over.

This Panettone is not, like its more traditional cousin, full of raisins and dried fruits. Instead, we have used candied chestnuts and chestnut cream, which makes this Panettone soft, melting, spicy. In a word, irrestistible.