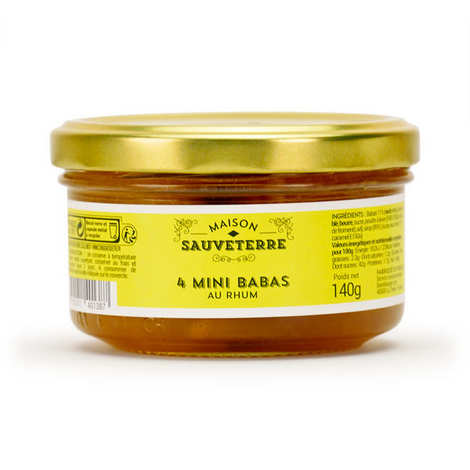 This cake is going to make you flabbergasted !

You are in an active search on a new cake, soft, but will not be too much at the end of a meal? You are fed up with quite dry biscuits?  You want to impress your guests but you don't have any pastry talent?

The rum baba from Maison Sauveterre is made especially for you and will save your day! It is a sure value dessert which defies time and gathers everyone around a table.

The dough is very finely honeycombed and soft in mouth. It is soaked with rum, it melts in the mouth as a marshmallow and delivers its good taste of rum. You will have a pure moment of sweetness because it is neither too insipid nor disgusting and has the right dose of alcohol.

This product contains four miniature versions of rum baba. They are small but like we say today: what is small is cute. Also, the small size of the packaging permits to protect the softness of baba. If you are, like me greedy, you can obviously taste several in a row.

Cooking tips: taste it with a whipped cream, an ice cream or with fruit in syrup.

A history to make you flabbergasted:

Did you know? The origins of the rum baba create a lot of debates…

Some people will tell you that it is during the first half of the XVIIIth century, when the king of Poland Stanislas Leszczynsky became Duke of Lorraine. He had the idea to spray a kouglof with a Tanaisie liqueur and to stick it of a whipped cream.

The name Baba was born because the sharpe of the cake reminded to King Stanislas dresses of the Poland women.

Other people will assure you that it is the Parisian pastry cook Stohrer who would have  invented it for the Poland king, Stanislas.,Then, in exile, would have received from his country an unfortunately dried bakery due to its journey. The pastry cook would had the idea to refresh it by spraying with Malaga wine and by sticking it of a pastry cream and dried grapes.