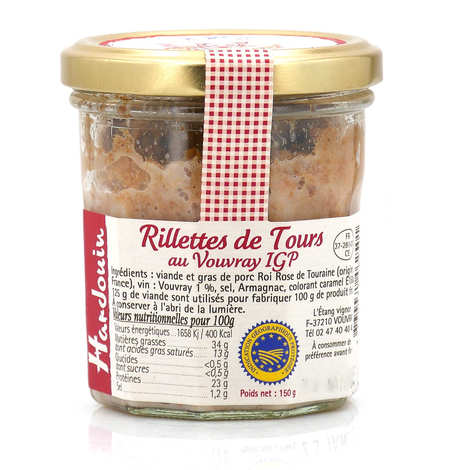 Traditional rillettes from Tours ! A traditional and generous recipe which makes the fame of a region, which will become an indispensable part of your cupboards.

Rillettes de Tours PGI are characterised by the use of noble cuts of meat, such as ham and loin, in their production. The result is a rillettes texture that is both frayed and chunky.

To be enjoyed on a good slice of farmhouse bread, in good company, and why not with a local wine ...

La Maison Hardouin uses a large cast iron pot to cook the rillettes slowly and uncovered, browning with the bones. This is stirred for several hours (min. 6 hours) to allow the moisture to evaporate and give the rillettes a nice golden colour.

A touch of Vouvray is added at the end of cooking and gives the rillettes a pleasant aroma.

A PGI for rillettes

In the Middle Ages, rillettes from Tours were mainly used as a means of preserving meat. It is from the 19th century that the craftsmen butchers took over the recipe and made it a dish in its own right.

Rillettes de Tours obtained the IGP (Protected Geographical Indication) designation in 2013, as a sign of recognition and quality. Maison Hardouin produces its rillettes in compliance with the specifications of this PGI and thus guarantees the origin and quality of the product.

It is in Vouvray, near Tours, that the Hardouin house has been located for more than a century. The spirit of this traditional charcuterie is preserved today and allows it to offer high quality products made according to traditional methods.